Posted on November 27, 2020 by Adventures in Cat Fostering

This girl is a delight. She is sweet and funny and affectionate. She runs like the wind and plays with everything from the expensive motorized toys to a dropped piece of popcorn. (For HOURS last night. Lol.) She’s quite vocal and will often come to me asking for attention, either to be picked up or to climb onto my shoulder — her favourite perch.

She is really working the grumpy old men. She has Jonesy’s number and completely ignores his histrionics. She rarely — if ever — backs down from him and often chases him around. She will march right up and start eating out of his bowl.

Murphy is another story — and she knows it! It’s fascinating to watch her change her tactics. She is completely respectful and lets him know she knows he’s in charge. Of course that doesn’t stop her from pushing the boundaries. And she’s figured out that if I’m around, she’s safer. He won’t react as badly and I’ll protect her. She doesn’t take advantage of that but she does use it. Especially if we’re all in bed. She’ll chirp and creep ever closer to him. If he reacts she comes back to me. I think she’ll get there.

Last week she had a play date with her sisters. It went ok but not as I expected. I thought she’d be happy to see them but she was kind of “meh”. That might have been because it was strange turf. They, on the other hand, were appalled at another kitten coming into their domain! Pumpkin (Coral) immediately donned her floof suit and watched from a distance. Daisy (Forrest) was more curious (Blue was in the carrier at first) but when Blue ventured out to explore, Daisy put on her floof suit, too. Eventually everyone calmed down and played, though Blue was still much more cautious than usual. There was some friendly nose touching and butt sniffing. We’ll try again another time.

Queen of all she surveys …

Posted on November 25, 2020 by Adventures in Cat Fostering 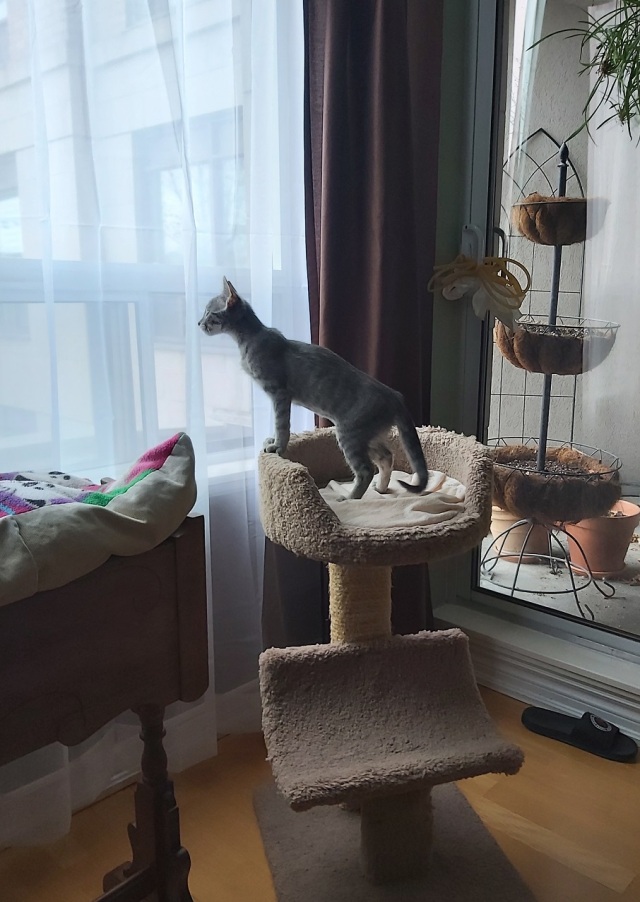 Posted on November 23, 2020 by Adventures in Cat Fostering

It was a mostly very quiet weekend around here. On Friday they announced another lockdown for the city (and some of the surrounding areas) beginning today. So you just knew that stores would be crazy on Saturday and Sunday.

We did have some excitement though, when a squirrel visited! 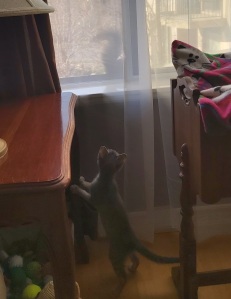 Everyone loves the canon. 😉 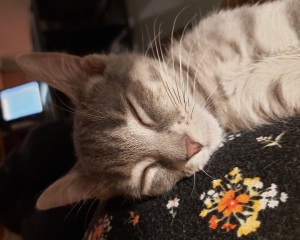 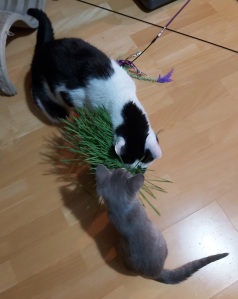 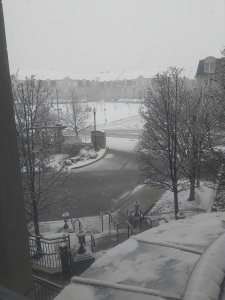 This happened on Sunday.

He loves it when the plants come back inside.

Posted on November 19, 2020 by Adventures in Cat Fostering

I had included a little note with my email address in Vermillion and Alfred’s adoption goodie bags. You never know if adopters will get in touch but it’s worth trying. I did indeed get an email — a predictable one. Vermillion was settling and snuggly, Alfred was a bit nervous. Neither a big surprise after 48 hours. I do hope Alfred will settle; I think he will especially since he has Vermillion to help him.

I’ve had three updats on Forrest/Daisy and Coral/Pumpkin. Lol. They are settling just fine.

Nothing yet about Buttercup and Chipmunk. 😦  Usually no news is good news. But it’s hard not to hear.

Posted on November 17, 2020 by Adventures in Cat Fostering

We went back for a recheck last week. The vet was really pleased with his progress. All I heard was “blahblahblah … 30 more days of pred”. Sigh. The good news is that I got the impression from the vet that if he’s completely clear of the lesion(s) on his chest that he can be weaned off the pred and maybe the food, alone, will be enough to manage his allergy.

In the meantime I begged for — and got! — permission to flag them as bonded when they can finally be posted to the website. Thanks to pictures like this:

Of course snuggling together is not a reason to bond. Even though they do it ALL the time, and  groom each other, and play and wrestle. The main reason is that they’ve been living together in a small room for FOUR months. They’ve made their transition from the hell they were living in together. They are best buddies and deserve to stay together.

Posted on November 16, 2020 by Adventures in Cat Fostering

Whew. That was a weekend. Poor Little Blue is having a bit of an adjustment. While she doesn’t have to get used a new home, like the others, she’s having to get used to no brothers and sisters. Saturday was really hard; she ran around calling for them to come and play. I tried to be an adequate substitute and didn’t do too badly. Fortunately, she will play with anything and has quickly learned to play “fetch”! She LOVES the little plastic springs and will bring them to me to throw. It’s a hardship to snuggle her every time she seems to miss them but it’s one I’m willing to endure. 😉 Though in all seriousness, she does seem to take comfort from me, so that’s reassuring.

The boys are getting better with her but still aren’t exactly friendly. I hope it will come.

Saturday here was glorious! Mild and very sunny. I spent the whole day cleaning — trying to clean up after seven hooligans. Reaching into corners I’d missed in earlier attempts, washing the couch cover(s), cleaning the cage. Even some windows. 😉 With very high winds projected for Sunday, I started bringing in my plants from the balcony. Little Blue is fascinated by the balcony. I plan to start harness training her as soon as she fits the smallest harness. Lol.

Sunday was the opposite. Dull, grey, raining. At one point it was raining so hard I could barely see across the street! And the predicted winds arrived. It was still mild enough to keep my windows open which meant the curtains were blowing and the air was whistling through my entry door! I had big plans but only got a few things more things done. Blue settled a bit more and returned to much of her former routine. She’s still getting used to her new normal but we’ll get there.

Posted on November 13, 2020 by Adventures in Cat Fostering

The kittens all had their spay/neuter surgeries

And now I can reveal that five of the seven already have homes!! Forrest (now Daisy) and Coral (now Pumpkin) are moving downstairs to one of my neighbours! Buttercup and Chipmunk are going to a LOVELY family with two small children.

Vermillion and Alfred went to one of our partner stores and before I got home from dropping them off they had an adopter — together!

But wait … what about Little Blue??? Well, after seven years and more than 230 fosters, Little Blue is staying right where she is. Yes, I’ve joined the ranks of “foster fails”. Though there’s nothing of “failure” about it! She has been special since she arrived, so tiny but mighty. Oh, the struggle to get her to put on weight! It’s been a horrible year and I deserve something adorable. And, truthfully, it weighs on me that my boys are getting up there. They’re healthy and happy but that could quickly change. Until ten years ago, I’ve usually had three cats at a time. I swore I never would again and yet, here we are. 😉

A gift from the gods

Posted on November 12, 2020 by Adventures in Cat Fostering 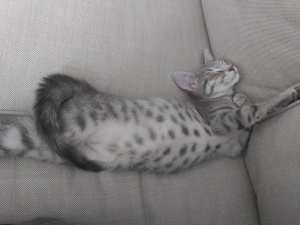 We are having an extraordinary stretch of good weather! It started last week and is expected to go for a few more days* yet! Mostly high teens celsius (mid to high 60s F). It got as high as 23°C (73.5°F) That’s incredible for November, especially since we did have snow about 10 days go! My plants can stay out on the balcony a bit longer and, more importantly, restaurant patios will be more comfortable. While some areas of Ontario have had a lot of restrictions lifted, Toronto, thanks to the “second wave” has gone back to heavier restrictions. Including no indoor dining at restaurants. I feel so, so bad for restaurant workers and owners! This weather feels like a bit of a gift for them. I hope it helps them hang on (though many, many businesses have disappeared in the last eight months).

Last Saturday a couple of friends and I headed over to The Shops at Don Mills for a very late lunch. It’s an outdoor mall — unusual for Canada — near my home. It has had mixed success since it opened about 10 years ago but has been very popular during COVID thanks to its outdoor spaces. Generally, its restaurants have done well but they must be struggling with the ban on indoor dining. Saturday, the place was hopping! Lots of people out and long waiting lists for tables! Our first choice had a 1.5 hour waiting list — at 2.30 in the afternoon! We waiting half an hour for our second choice. I was so happy for the restaurants and thrilled that people were out supporting them. Nice for people to be able to be out, too. Yes, we go out and conduct our affairs when it’s -10°C (14°F) or worse, but it’s not very conducive to strolling and people watching! And certainly not to outdoor dining. Our second wave continues to worsen and yesterday tougher restrictions were extended (and expanded) until at least December 12.

* after that it will still be “warm” by November standards!

Posted on November 11, 2020 by Adventures in Cat Fostering 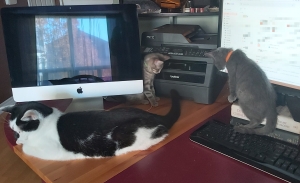 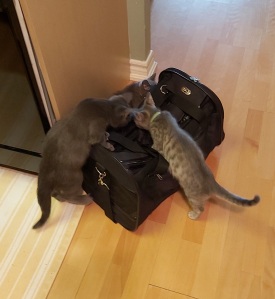 Torturing Murphy (who had vet visit)

New toy. Kind of amazing because Murphy hates a) mechanical toys and b) kittens. Lol.

Buttercup demonstrates the “if I fits” principle.

Jonesy is not a big fan of wand toys but he liked this one. Until he realized there was a kitten behind him. The look of horror kills me. 🙂 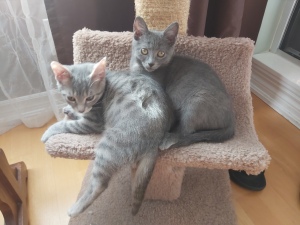 Buttercup and Coral having a rest.

Posted on November 5, 2020 by Adventures in Cat Fostering

Good thing I have that extra two hours every day thanks to not commuting to work!

And all day there’s this kind of nonsense to deal with: 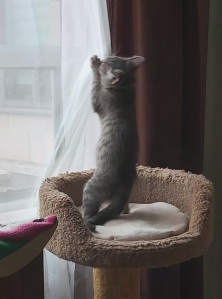