Posted on August 31, 2014 by Adventures in Cat Fostering

JJ was my longest foster, so far, and my biggest challenge. I got JJ after she’d been at Toronto Animal Services for five months. JJ was a beautiful torbie* with a very healthy dose of “tortitude” (Google it, for fun). She wasn’t happy in the shelter and wasn’t showing well. When I arrived to pick her up, they weren’t sure they’d get her in the carrier. (I found out later that she’d almost been adopted but the adopters backed out when she didn’t want to go into a carrier!) In the first of many examples of JJ knowing what’s best for JJ, they had no problem loading her in.
When we got home, I released her into my foster cat room. She stepped out of the carrier and stood there purring and kneading (the floor!) as if to say “this is more like it”. After her two week quarantine JJ marched out of her room and took charge of the condo and everyone in it. She bossed my boys mercilessly, but adored the dog I occasionally look after. 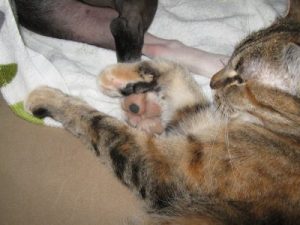 After a couple of weeks, she went to an adoption event. And bit someone! I was horrified. JJ had always been friendly and affectionate with visitors. My teenage cat-sitters “complained” that she wouldn’t leave them alone. The volunteers assured me she’d been provoked, though I got no details. A couple of weeks later, another adoption event. When I got home from dropping her off, there was an email waiting: You’d better come and get her. She bit someone again. This time, there was no talk of being provoked.
More time went by. There were a couple of calls that people were interested, but none panned out. Then came a call and a visit was booked. A very nice young woman came to see her. JJ was polite – accepted treats – then walked to the other side of the room, sat down and stared. Needless to say, we didn’t hear from that woman again.
Then after she’d been with me six months, another call. The adoption counsellor told me it was an older couple. I refused to get my hopes up. Twenty minutes later, they called. Could they come and see her? We booked a time for that afternoon. Al had recently lost his 18-year-old dog and realized that he wasn’t able to take on another dog. Helene had had cats in the past, and they’d recently done some cat-sitting. Al decided that a cat would make a nice companion for him while Helene was away all day at work.
As they walked in the door, JJ perked up from her snoozing spot. When they sat down, she was immediately attentive. She accepted treats from Helene and stayed for petting. Now, one thing about JJ, she only liked “classic” petting. Head-to-tail. No “bonks”, no “skritches”. As she walked over to Al, I noticed that he had a bit of palsy in his hand. He reached down to pet her and I went tense ready to spring to his defense. That cat stood there and let him “bonk” her on the head! I would have had my arm ripped off if I’d done it. And when Helene called her by name, she whipped her head around and trotted over. I was stunned. She weaved against legs, she purred. Needless to say, they took her! And when it came time to put her in the newly-purchased-designer-carrier (!!), she practically walked in by herself.
A week later I got a follow-up call from Helene. Everything was wonderful! JJ had adjusted well and was happy and settled. Al and Helene were “thrilled”. I saved the message for months, just for joy and smile in Helene’s voice.
I’ve heard lots about cats “choosing” their people. I’d always been skeptical. JJ made a believer out of me!

* a “torbie” is a tabby-striped tortoise-shell

About Adventures in Cat Fostering

I am a cat fosterer for Toronto Cat Rescue. I also have cats of my own, Jonesy, the black and white, and Murphy, the brown tabby, are in the photo. Little Blue was a foster kitten I kept. All were adopted from Toronto Cat Rescue.
View all posts by Adventures in Cat Fostering →
This entry was posted in Uncategorized and tagged adoption, cats, foster, fostering, torbie, tortitude. Bookmark the permalink.